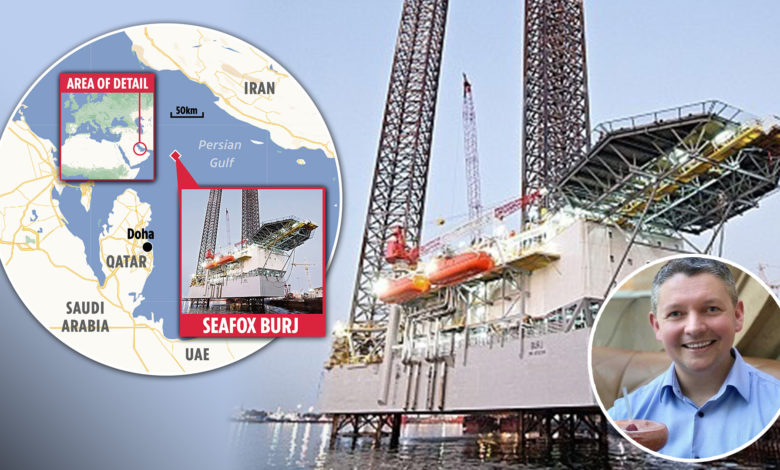 British oil rig worker Scott Forrest 'bashed a colleague to death with an air cylinder and planned to escape on a chopper after he'd had his tea it has been alleged':

'Killer' is detained after attacking friend who stumbled across 'crime scene'

A murder investigation has been launched in Qatar after a Scottish oil rig worker was allegedly beaten to death on an offshore platform.

The man, believed to be a married father, was found dead on board the oil rig in the Persian Gulf by a colleague who is then understood to have also been attacked.

It has been claimed the dead man had been 'bludgeoned' with a breathing apparatus bottle before his body was wrapped up in a bed sheet and attempts were made to conceal it in a bathroom in the staff living quarters. Energy People is choosing not to name the victim at this time.

The suspect, Scott Forest from Aberdeen, had reportedly planned to flee on a helicopter, but was detained after attacking a second man who had gone to check on his co-worker.

He is understood to have suffered serious injuries and was taken to hospital.

Workers on the rig said the survivor had been hit over the head and throttled but managed to escape and get help.

One said: 'Apparently, one guy battered another worker with a BA [breathing apparatus] bottle.

'We were told he then wrapped him up in the bed sheet and put him in the bathroom. Then he went for his dinner.

'A third guy saw him and asked how the now dead man was and said he was going to see him.

'He followed him back to the room and then hit him over the head and started to strangle him, but he managed to escape and get help.' Another said it was thought the man responsible had intended to try to dispose of the body by 'throwing him overboard before getting on a chopper that night'.

All three men were Scots contractors and were employed by Ellon-based Film-Ocean, which yesterday described the incident as 'non-work related'.

Qatari authorities are holding the suspect along with two other men for questioning as part of a criminal investigation into the incident in the early hours of Monday on the Seafox Burj platform. Film-Ocean, which owns and operates a fleet of remotely operated vehicles for the oil industry, has said it is working with the authorities and the Foreign Office to establish the circumstances surrounding the man's death.

Qatar Law states that anyone found guilty of murder can be executed by firing squad or hanging.

The injured man, Christopher Begley, from Coatbridge, Lanarkshire, was treated in hospital but has since been released and is hoping to be with his family soon.

His father Dennis said his son was in 'complete shock' over what had happened as he had previously been on 'friendly' terms with the alleged attacker.

He said: 'They all work together. There's been no animosity between any of them. This seems to be completely random. There certainly wasn't any ill feeling among any of them so I don't know what's happened.

A spokesman for Film-Ocean said: 'We can regretfully confirm one person has been fatally wounded and another has been injured following a non-work related incident on an offshore installation off Qatar.

'A third person has been taken into police custody. The injured worker received treatment in hos- pital but has since been released. The next of kin of those involved have been informed and the company is working to ensure they receive the appropriate support.

'Film-Ocean is liaising with the Foreign, Commonwealth and Development Office to establish the full circumstances surrounding the incident. The families of those involved have requested that their privacy is respected.'

The Foreign Office confirmed that the family of the man who died have been informed.

A spokesman said: 'We are supporting the family of a British man who has died and a man who has been injured in Qatar.'