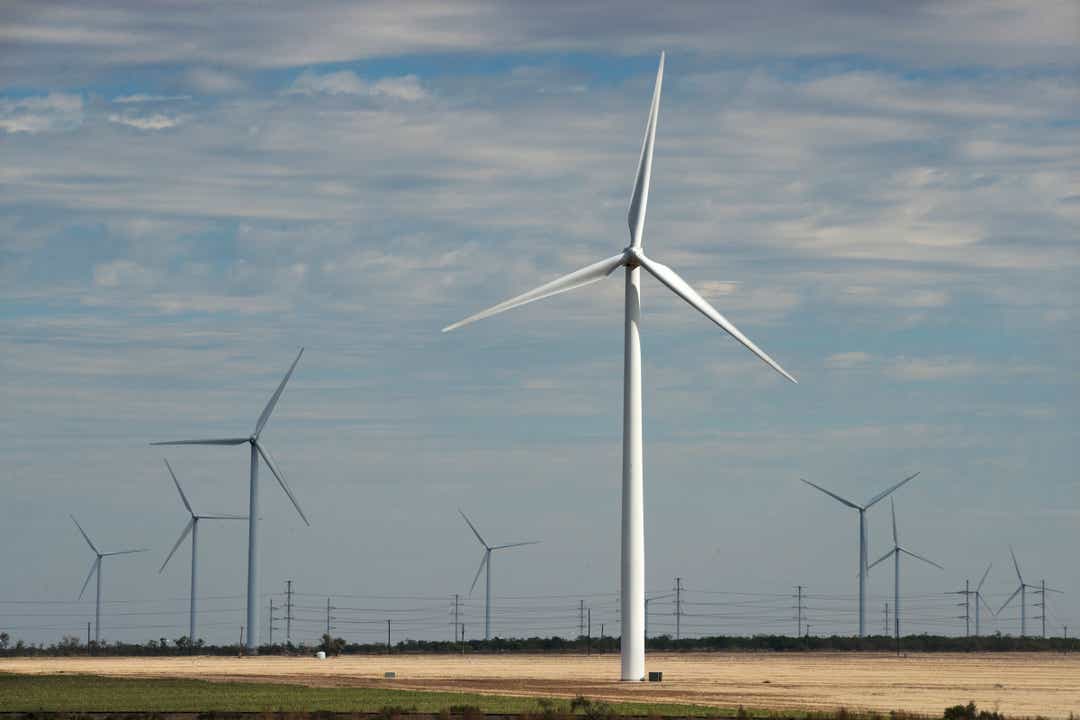 ROSCOE, Texas — The sprawling Roscoe Wind Complex stretches across four counties and 84,000 acres in West Texas — bigger than five Manhattan islands. Located about three hours west of Fort Worth, it’s comprised of 627 turbines that could generate up to 782 megawatts of electricity an hour, or enough to power 234,000 homes for a full year.

Nearing the wind complex, first one enormous turbine emerges from the cotton and wheat fields, then another, then a row of them — then hundreds, their gigantic blades spinning steadily in the blustery Texas wind. Each turbine is more than 200 feet tall, the size of a 20-story building, with blades that point 95 feet into the air.

For a state tied both economically and in the American imagination to oil, gas and coal, Texas has in recent years become the biggest generator of wind power in the U.S. By next year, Texas is poised to get more of its electricity from wind than coal.

All that wind adds up. Texas now produces one-quarter of all U.S. electricity from wind. If Texas were a country, it would rank fifth in the world for wind power capacity.

Texas' robust use of its wind could also serve as a map for other U.S. states with substantial wind resources at a time when climate change scientists are warning that governments must embrace clean energy or the Earth could become uninhabitable.

Texas isn't oil country, or coal country, or even fracking country, said Sarah Mills, an engineer and development expert who studies wind energy in rural areas at the University of Michigan in Ann Arbor, Michigan.

There are several reasons why Texas has become the nation’s largest producer of electricity from wind.

First off, it’s gusty as all get out. “Texas has a boatload of wind,” said Chrissy Mann of the Sierra Club’s Lone Star chapter.

Texas sits right in the wind belt, a swath of land blessed with an excellent wind resource. The wind resource continues straight up the middle of the country to Canada and includes Oklahoma, Kansas, Nebraska and the Dakotas. There's also significant wind in portions of Minnesota, Iowa, Wyoming and Montana.

Most have been building out their wind energy installations. Iowa gets 34% of its energy from wind power and in Michigan some townships are using taxes from wind turbines to pay down their pension liabilities, said Mills.

But the Lone Star state has it all: less restrictive zoning, taxation systems that encourage building and robust transmission lines that together have allowed it to jump ahead of the rest.

"Texas is unique. It's got a range of policies that all play well together," said Mills.

Texas crucially decided in 2005 to invest in 464 miles of power transmission lines stretching from the northern and western parts of the state, where the wind blows, to the eastern part of the state, home to most of its cities and industry.

The state's wind revolution began under then-Gov. George W. Bush, who oversaw the deregulation of the state’s electricity market beginning in 1999. It boomed under his successor, Rick Perry, a Republican governor who’s now the U.S. Secretary of Energy and a strong proponent of fossil fuels.

“They were interested in economic development for the state. It wasn’t a matter of climate change or ideology, it was purely economics. This has always received bipartisan support in Texas,” said Robert Stavins, a professor of energy and economic development at the Harvard Kennedy School at Harvard University in Cambridge, Massachusetts.

Texas' wind industry also benefits from the state having large rural areas with few zoning restrictions and a strong ethos of limited government intervention into what landowners can do on their own property.

“There aren’t a ton of rules about where things get put. And there are lots of landowners with large swaths of land who can place multiple turbines,” said Mills.

Texas has its own energy transmission system, ERCOT. Because the state controls its energy and because the system doesn’t cross state lines, it’s not subject to the Commerce Clause of the Constitution, which would give the federal government the power to regulate it, said Stavins.

“It doesn’t have to receive federal permits, so it’s able to move more quickly on infrastructure,” he said.

The Roscoe complex is owned and run by German energy firm RWE Renewables, which recently acquired it from E.ON, also based in Germany.

As long as the wind blows, the turbines spin, generating power that travels to Dallas, Houston and other urban centers in Texas, as well as much of the surrounding area, said Rich Hudson, the complex’s regional operations manager. On a recent day, he drove through the blacktop roads dissecting the wind complex, past switchyards and substations that send the energy to ERCOT.

Even West Texas’s powerful lightning storms don’t stop the turbines, Hudson said. The turbines are equipped with “lightning arrest systems” that send a bolt of lightning to the ground if they’re hit, Hudson said. They’re also designed to stop turning if the winds get too strong, he said.

During Hurricane Harvey two years ago, a RWE wind farm near Corpus Christi was put to the test as the Category 4 storm took aim at the Texas coast.

Operators there shut down the turbines as the massive storm neared and “feathered” the blades – or angled them for the least amount of wind resistance, said Matt Tulis, an Austin-based spokesman for RWE. A substation and another facility flooded but the turbines were unscathed.

“When the guys got back on site, they were surprised at how little damage there was,” he said.

Thousands of wind turbines
In all, Texas has 14,720 wind turbines operating in the state, according to the U.S. Office of Energy Efficiency & Renewable Energy.

Despite the high number of turbines in the state, national data shows that in general residents who live by wind turbines don’t seem perturbed by them.

A study published this month by the federal Lawrence Berkeley National Laboratory found that 57% of people who lived within 5 miles of a wind turbine were either positive or very positive about them. Only 8% were negative or very negative. The study was funded by the U.S. Department of Energy.

“The majority of people we surveyed were within half a mile of an existing turbine, so they were people who know all about them, they’ve heard them and seen them day and night,” said Ben Hoen, a research scientist with the Electricity Markets and Policy Group at the federal Lawrence Berkeley National Laboratory in New York.

Wind produces a substantial number of jobs in the state. More than 25,000 Texans work in the industry. To maintain the turbines, teams of technicians constantly visit the structures, inspecting gears or conducting pre-planned maintenance.

Wind dollars pay for local services
For rural communities that have been hollowed out by declines in agriculture and manufacturing, wind energy is a win, said the American Wind Energy Association's Sloan.

“The farmers and ranchers get the income from the land, the communities get a bigger tax base and the cities get a cheap, stable energy source," she said.

All this makes wind an increasingly valuable resource that’s allowing rural areas to remain vibrant, said Cyrus Reed, conservation director for the Lone Star Chapter of the Sierra Club, one of the oldest environmental groups in the nation.

“You don’t have to choose,” said Reed. “You can have turbines and a cotton field and a pumpjack [oil well] all on the same acre.”

KC Hope, a technician at the RWE complex in Roscoe, agrees. He’s seen how the wind farm has transformed his small hometown, with its population of 1,293. Landowners are earning steady royalties from turbines on their farms and the local county has been bolstered by a surge in tax revenue, he said.

The turbine leasing money went into transforming the local high school, Roscoe Collegiate High --“Home of the Plowboys and Plowgirls”-- into a top-tier, state-of-the-art STEM school that draws transfer students from other counties, said Hope, who is also a city councilman.

“We’ve transformed in a way we wouldn’t have without them,” he said of the turbines.