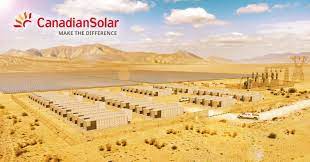 Canadian Solar’s project development subsidiary Recurrent Energy has sold a majority stake in its 350MW / 1,400MWh Crimson energy storage project in California currently being readied for the start of construction.

The project, which will be one of the biggest battery energy storage systems (BESS) in the world, has been 80% sold to investment portfolio management firm Axium Infrastructure, a group with more than US$5 billion in assets under management and about US$1.4 billion co-investments. Recurrent Energy will retain 20% ownership.

Crimson got its final approval to go ahead from the US Department of Interior’s Bureau of Land Management in May, although at that time it was planned as a solar-plus-storage project including 350MW solar PV paired with the battery. It will be sited on public lands in the California desert, in Riverside County. Energy-Storage.news has reached out to Canadian Solar and Recurrent to find out about the status of any potential solar PV array at the project.

Now described as a standalone energy storage project — and Canadian Solar’s first project of that type — construction is expected to begin in Q3 this year and go into commercial operation next summer. Another Canadian Solar subsidiary, CSI Solar, will carry out engineering, procurement and construction (EPC) duties and long-term operational services.

Two long-term contracts have been signed with California investor-owned utilities. Southern California Edison (SCE) has a full tolling agreement for the 200MW / 800MWh Phase I of the project, over a term of 14 years and 10 months. Pacific Gas & Electric (PG&E) has a 15-year capacity contract for Resource Adequacy for Crimson’s 150MW / 600MWh Phase II. Resource Adequacy is the means by which California load-serving entities must satisfy the regulatory California Public Utilities Commission (CPUC) that they have enough energy capacity available to meet their customers’ needs. Meanwhile Recurrent and Axium will put the battery system into the wholesale market of regional grid operator CAISO.

Recurrent Energy said in June that it had 2.3GWh of battery projects at late stages of development — all of which are in California, still the US’ leading energy storage market by state. Parent company Canadian Solar has long emphasised how important it believes energy storage is, both as a part of the solar energy industry’s future and for the company’s own fortunes.

On a related note, Canadian Solar announced a few days ago that it had signed operations and maintenance (O&M) contracts for two of Recurrent Energy’s large-scale solar-plus-storage projects in California’s Kings County.

The Slate Project 300MWac solar PV plant with 140MW / 561MWh battery storage is currently under construction, while Mustang Project is a 75MW / 300MWh BESS retrofit at an existing 100MWac solar PV power plant. Both have been sold to Goldman Sachs Renewable Power.