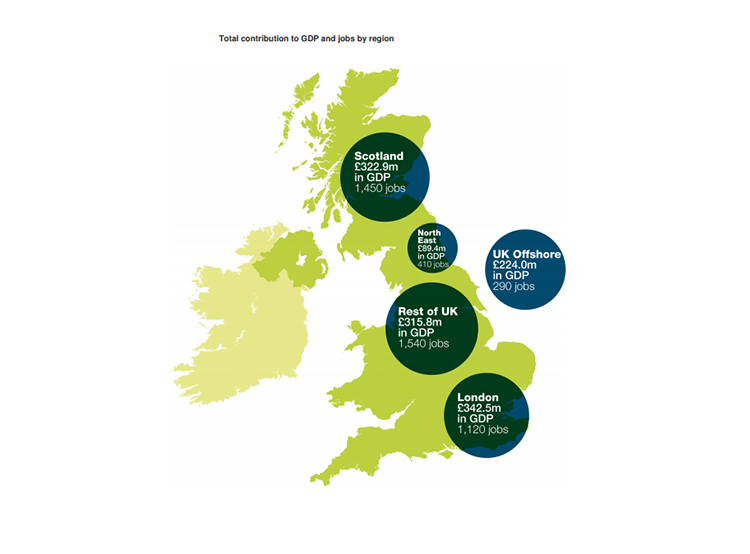 A new report published 15 October has revealed the full extent of the economic benefits being generated by the Cygnus gas project – the UK’s largest Southern Gas field discovery in the past 25 years.

The report by leading economics consultancy Oxford Economics has highlighted how the project will add £1.29 billion to the UK economy and support more than 4,820 skilled jobs during its five-year construction period.

It comes as drilling begins at the Cygnus field, following a successful installation campaign which has seen one platform and the jackets for a further two platforms safely in place.

Economic benefits will be felt across the UK, in particular throughout Scotland and the North East of England, where 19,000 tonnes of offshore infrastructure is being built at yards in Hartlepool, Fife and the Highlands.

Most cash spent in UK

The budget for the overall project is in the region of £1.4 billion. Of this, just over £250 million will be spent on contractors and suppliers based overseas, leaving almost £1.15 billion to be spent within the UK.

According to the report, in Scotland, where one platform and the bases for all four platforms are being built, £323 million will be generated in the economy, securing 1,450 jobs including 15 apprenticeships at yards in Fife.

Across the North East coast, it will bring nearly £90 million to the local economy and secure over 400 jobs, including in Hartlepool. Three platforms for Cygnus are being built in the town, making it the third consecutive offshore project by Centrica Energy to involve major construction work in Hartlepool.

“The total contribution of the Cygnus project to UK GDP is expected to be £1.29 billion over a near-five-year period, sufficient to support an average of 4,820 jobs over that time.”

The investment in offshore operations, including transporting and installing the infrastructure for the Cygnus field and bringing the field into production, will bring nearly £225 million for the UK economy and support nearly 300 jobs.

Across the rest of the UK, the spending of people employed by the Cygnus partners and contractors will support 1,540 jobs, adding £315.8 million to the nation’s economy.

At peak the Cygnus project, which was sanctioned in 2012, will produce enough gas to meet the demand of 1.5 million UK homes.

“The Cygnus North Sea project is already supporting valuable income and employment opportunities in the North East, in Scotland and throughout the UK”

Adrian Cooper, CEO of Oxford Economics, said: “The Cygnus North Sea project is already supporting valuable income and employment opportunities in the North East, in Scotland and throughout the UK, even though the gas production process itself has yet to start. The benefits are being felt not just by those directly involved in the design and build of the required infrastructure, but also by suppliers of goods and services of all kinds to those contractors in turn.”

Colette Cohen, Senior Vice-President for the UK and the Netherlands at Centrica Energy, said: “This report underlines how significant an impact the Cygnus project is having across the UK both in terms of investment and jobs, as well as strengthening our security of gas supply. This is a great example of what can be achieved when we invest in skilled people across the UK, creating thriving energy coasts and securing gas for the UK.”

The development was sanctioned in 2012 following the UK Government’s decision to introduce a field allowance for new large gas fields in shallow water, which provided GDF and the project partners with the certainty needed to go ahead. First gas at the field, 150km off the coast of Lincolnshire, is targeted for the end of 2015.