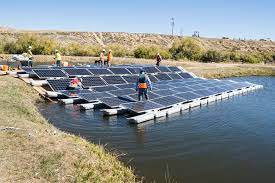 Developers intend to install the floating solar panels atop storage ponds, water treatments plants, and other human-made bodies of water — a first in a state mired in debate over how best to site projects.

A new joint venture between Boston-based BlueWave Solar and European photovoltaics firm Ciel et Terre is poised to bring floating solar panels to the ponds and reservoirs of Massachusetts for the first time. Supporters say the plan has the potential to mitigate ongoing concerns about finding enough space for clean energy development.

BlueWave has a history of building community solar projects and so-called “dual-use” installations, in which solar panels sit over active agricultural fields. Ciel et Terre, based in France, is a pioneer in the floating solar sector. The company introduced Hydrelio, a modular floating photovoltaic system, in 2012. In 2017, it launched a U.S.-based development arm, Laketricity.

Together they intend to develop floating solar projects atop human-made bodies of water such as storage ponds, water treatment plants, quarries, and reservoirs in Massachusetts and, eventually, the entire Northeast. Laketricity will contribute technology and on-the-ground experience, while BlueWave will share its extensive knowledge of the Massachusetts clean energy market and the Solar Massachusetts Renewable Target program (SMART), which provides incentives to encourage solar development.

The Hydrelio system consists of photovoltaic panels mounted on floating bases that can essentially be snapped together. The array is then anchored to the shore of the pond or reservoir it is located on.

“The panels are put together like a big LEGO set,” Wissing said. “You basically build a floating solar island a row at a time.”

The plastics used have been certified drinking-water safe in the United Kingdom, so they will not contaminate the water on which they float. At the same time, the water helps cool the panels, increasing their efficiency by as much as 10%, Wissing said.

The partners have identified locations with strong potential for floating solar. The best sites, Wissing said, are at least four acres, are not currently used for any swimming or boating, and have access to three-phase electric power.

The companies have begun the process of reaching out to the owners of these sites, both private and public, about possible development. They are not yet ready to release any details about these locations, but could be ready to begin construction within two years, Marsch estimated.

Existing projects suggest there is promise in floating solar. In California, the town of Windsor worked with Laketricity to install a 1.8-megawatt system on top of a recycled water storage pool. The panels generate power for the town’s wastewater reclamation plant and have been a success so far, said Garrett Broughton, an associate civil engineer for the town.

“We do not regret it,” he said. “It probably already paid for itself within the first year.”

The Windsor project is one of few floating solar arrays that have been deployed in the United States. However, these systems, sometimes referred to as “floatovoltaics,” have been much more widely adopted in Asia, where population density and mountainous terrain leave scarce land for solar installations.

Massachusetts has also had issues with limitations on buildable land, which has given rise to ongoing debate over how best to site projects. Environmental groups have expressed concern about using previously undeveloped land, known as “greenfields,” for solar installations, which means cutting down trees and disrupting existing open spaces. At the same time, residents living near proposed solar sites often object to the aesthetic and environmental impacts of replacing trees with solar panels. Recently, the state modified its incentives to reduce the financial benefits for projects built on greenfields.

Some in the industry, however, have argued the state will never reach its clean energy goals without developing these areas. Though rooftops and previously used land can be developed into solar projects, these sites can come with added costs and are rarely big enough to host arrays that can serve large numbers of customers, they contend. At the same time, the change in the incentives could be enough to make larger greenfield developments financially unfeasible, they say.

Both the new venture and outside experts contend that floating solar offers a chance to ease this tension by adding clean energy capacity without using any land at all. A 2018 study by the National Renewable Energy Laboratory found that installing floating solar on the country’s more than 24,000 human-made reservoirs could save 2.1 million hectares of land and meet some 10% of the country’s annual electricity needs.

“In space-constrained places, it’s a way to just get more photovoltaics on the grid,” Marsch said.

“Lakes with residential homes — and usually boat docks — are not the target,” Wissing said.

Massachusetts is also an appealing place to pursue floating solar developments because the SMART program already includes incentives for this form of solar (though no projects have yet taken advantage of that provision). The incentives pay the owners of solar systems a base rate of anywhere from 9 cents to 39 cents, depending on location and when the project is built, per kilowatt-hour of energy generated. Developments can increase the compensation rate by including features the state wishes to encourage, like building on a landfill or a rooftop. Floating solar panels on a human-made body of water adds 3 cents to the rate, upping the payback for system owners.

Cranberry farms are a property that could benefit from the technology, Wissing said. Massachusetts is the country’s second-largest producer of cranberries, with some 375 farms statewide. Some cranberry growers store water for flooding their bogs in separate reservoirs that could, Wissing said, be excellent candidates for floating solar.

The panels would create an additional income stream for growers, who often face financial uncertainty due to market fluctuations. Furthermore, because the panels and floats would cover some of the surface, less water would evaporate from the reservoir in dry times.

Many interested growers, however, may not qualify for the additional incentive money, said Iain Ward, a veteran Massachusetts cranberry farmer and solar consultant. Because many cranberry reservoirs were originally natural wetlands that have been reinforced and shaped into their current form, they do not qualify as human-made under the incentive regulations. Still, Ward said, growers interested in solar should still consider floating panels.

“There’s less money there, but it’s land that is not making anyone any money right now,” he said. “It’s an exceptionally good thing as an add-on to a project that’s going forward.”

If floating solar is as successful in Massachusetts as BlueWave and Laketricity believe it could be, it could end up influencing policy in other states as well, Marsch said.

“Massachusetts has been kind of this laboratory to develop these policies that end up getting propagated out to the rest of the country,” he said.