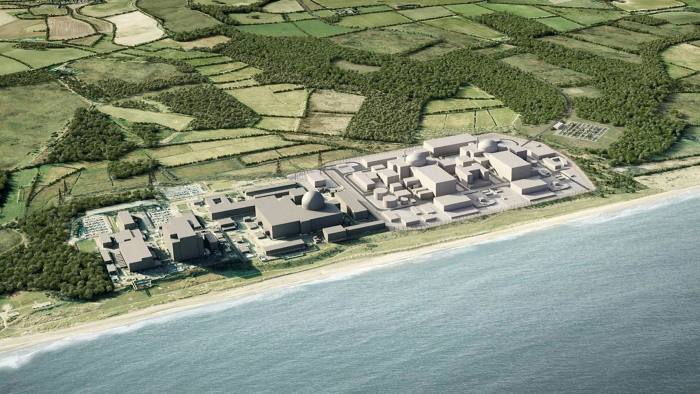 EDF is poised to submit a planning application for a large nuclear power station on England’s east coast despite opponents’ complaints that Britain’s coronavirus lockdown will hamper proper scrutiny of the project.

Suffolk residents have raised concerns about how they can examine and contest the application for the Sizewell C plant after government scientific advisers warned that disruptive social distancing measures would probably be in place all year.

The French utility has been working with Chinese state-owned nuclear company CGN on the plans for Sizewell, which could provide 7 per cent of the UK’s electricity.

The two companies are already constructing Hinkley Point C in Somerset, the UK’s first new nuclear plant in three decades, but the project has been hit by cost overruns and delays. EDF warned last year that Hinkley’s completion could cost an extra £2.9bn, taking the total to £22.5bn.

Alison Downes, a Suffolk resident who represents campaign group Stop Sizewell C, said submitting the application during the Covid-19 pandemic would “escalate anxiety at a time when people have got a huge amount of others things to be anxious about”.

She added that people would not be able to hold meetings to discuss the company’s plans while social distancing measures were in place.

EDF, which is expected to submit its application in early May, said it had planned to do so at the end of March but delayed because of the pandemic.

Humphrey Cadoux-Hudson, managing director for nuclear development at EDF Energy, the French utility’s UK division, wrote to Suffolk parish councillors this month saying the company had received assurances from the UK’s Planning Inspectorate that it had the resources to process the application during lockdown.

He said EDF would discuss with the inspectorate the possibility of delaying the “examination phase” of the process — during which hearings are held with stakeholders — “until they are happy that no parties will be disadvantaged”.

EDF is keen to press ahead with the planning processes. It argues that Sizewell C could be built for 20 per cent less than Hinkley by replicating what it has done in Somerset and transferring experienced staff from one project to another. It is hoping to take a final investment decision on Sizewell C at the end of 2021 or in early 2022.

However, there are also big question marks over the funding for Sizewell C. EDF has been pushing for a Regulated Asset Base (RAB) model, a type of financing used for other infrastructure projects such as electricity networks and the Thames Tideway “super sewer” in London.

But the proposal has attracted criticism from opponents of nuclear power, who point out such a financing scheme would mean consumers are paying upfront via their energy bills for new plants before they are even built. The government launched a consultation on the RAB model last year but has yet to report back.