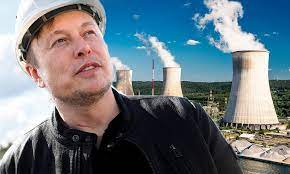 So said Musk on Wednesday while talking about making bitcoin mining sustainable at The B-Word conference hosted by the Crypto Council for Innovation.

Nuclear energy is considered “clean energy” because generating nuclear energy does not release greenhouse gasses. But due to some high-profile accidents, legacy nuclear power plants can have a bad reputation.

“I think modern nuclear power plants are safe contrary to what people may think,” the Tesla and SpaceX CEO said.

Nuclear fission is the process used in conventional nuclear reactors. With a fission reaction, a neutron slams into a larger atom splitting it into two smaller atoms, which releases energy.

Fusion is the opposite reaction to fission. With fusion, smaller atoms slam together and join into a heavier atom, thereby releasing energy. Fusion is the process by which the sun generates energy.

“You’ve got that big fusion reactor in the sky called the sun. It comes up every day,” Musk said.

Some herald fusion as a safer way to generate nuclear energy, because fission generates radioactive waste that can remain dangerous for a very long time, while fusion does not generate long-lived radioactive waste (among other reasons).

The problem is, with present technology, fusion usurps all the energy it creates to sustain its reaction, leaving no “net energy” to power other things. Several companies are working to commercialize fusion energy, but so far, they have not been successful.

On Wednesday, Musk did not elaborate on how nuclear power plants could be made “extremely safe.” But Musk has publicly supported the use of nuclear energy for years.

“We should build more nuclear power plants,” Musk said in 2007 interview with PBS. “I think that’s a better way to generate energy than certainly a coal power plant or a natural gas power plant.”

Currently, about 20% of the energy generated in the United States is from nuclear, according to the U.S. Energy Information Administration.

Still, there is strong opposition to the use of nuclear power.

Opponents to nuclear power say there are still risks associated with nuclear power, despite technological innovations, and the better solution is to focus on ramping up renewable energy sources, like wind and solar.