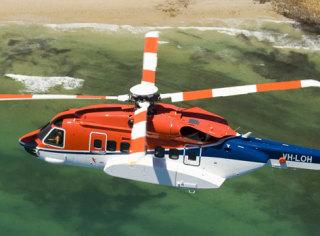 Helicopter transportation is fundamental to the offshore oil industry, and the market for oil & gas related offshore helicopter services is estimated to be worth US$24 billion over the next five years, 2014-2018.

GE engines are used in rotary-wing aircraft made by three of the four commercial helicopter manufacturers: Sikorsky from Connecticut-based United Technologies Corp.; Anglo-Italian AgustaWestland, a subsidiary of Finmeccanica SpA;and Fort Worth, Texas-based Bell Helicopter, a division of Textron Inc.

The fourth major manufacturer is Airbus Helicopters, a division of Airbus Group NV.

GE’s aircraft leasing division, GE Capital Aviation Services (Gecas), was already the world’s largest, with more than 1620 owned and serviced aircraft. Bloomberg reported in February that Gecas CEO Norm Liu, said “We’ve gotten into turboprops, regional jets, cargo planes. We have to look at new adjacencies -- we’re looking at helicopters.” At that time, Liu said the company had not made a final decision on helicopter leasing.

Milestone was founded in 2010 by Richard T. Santulli, has amassed a $2.8 billion fleet of helicopters, and placed orders worth another $3 billion. Under the terms of the GE buyout, Santulli will be chairman of the helicopter leasing business within Gecas.

Houston-based Bristow Group says it controls about one-third of the global fleet that services the oil and gas industry and plans to expand.

CHC Helicopters, based in Richmond, British Columbia, says it is the largest commercial helicopter services company in the world, with offshore transportation services offered in Canada, Brazil, East and West Africa, UK, Norway, Netherlands, Central Asia, Australia, and Southeast Asia. It has a fleet of about 250 rotary-wing aircraft (Sikorsky, Eurocopter, and AgustaWestland).

Regional providers also control significant parts of the market. Lafayette, Louisiana-based PHI Inc. began with three Bell 47 helicopters in February 1949 and now runs a fleet of Bell, AgustaWestland, and Sikorsky helicopters in the Gulf of Mexico and around the world. The company says it has "flown more types of helicopters, under a greater variety of conditions, over a longer period of time, than any other civilian helicopter operator…achieving more than ten million flight hours.”

Malaysia-based Westar Aviation Services says it is the largest provider of offshore oil & gas helicopter transportation services in Southeast Asia with its fleet of Sikorsky and AgustaWestland helicopters.