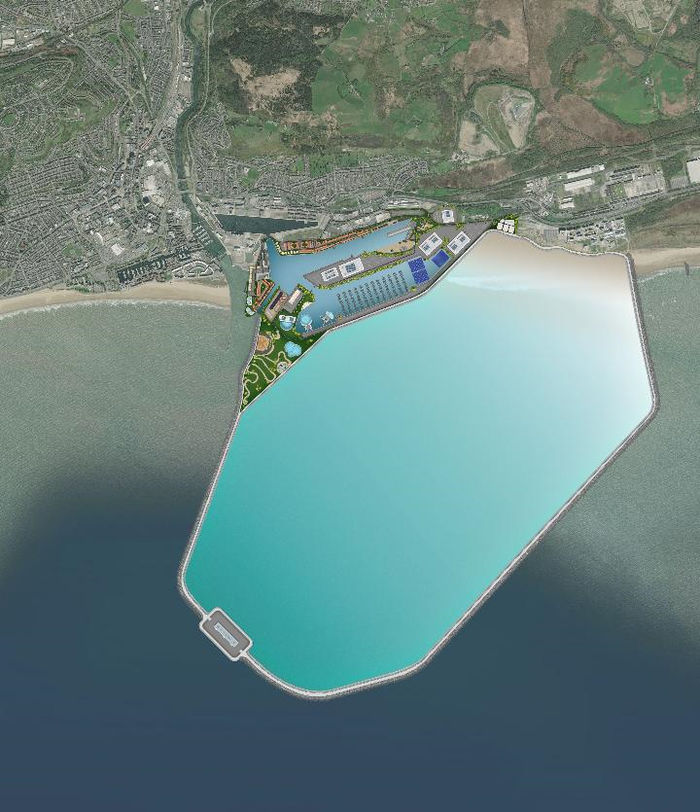 A £1.7 billion project, expected to create thousands of well-paid jobs and place Wales at the forefront of renewable energy innovation, has been announced by an international consortium.

Described as ground-breaking project for Swansea’s waterfront, the proposed scheme will include a newly-designed tidal lagoon, featuring state-of-the-art underwater turbines generating 320MW of renewable energy from the 9.5 kilometres structure.

The lagoon is part of the larger proposed Blue Eden project that’s being led by Welsh-based DST Innovations and a number of business partners, with support from Swansea Council and Associated British Ports.

Made possible by funding from the private sector, the innovative and economy-boosting Blue Eden will be delivered in three phases over 12 years.

The project plan also includes a 60,000 square metre manufacturing plant to make high-tech batteries for renewable energy storage, and a battery facility that will store the renewable energy produced at Blue Eden and power the site.

If constructed now, it would be the world’s largest facility of its kind, according to project developers.

In addition, a 72,000 square metre floating solar array is planned to be anchored in the Queen’s dock area, helping offset CO2 emissions by an estimated two million kilogrammes a year.

This also would be the UK’s largest facility of its kind, with potential for expansion, the project developers said.

In addition, the project envisions a data centre for storing, processing and providing network capabilities for the critical services needed in modern day operations that will be entirely powered by an uninterruptable renewable energy power supply.

Furthermore, the project also plans to include an oceanic and climate change research centre, foating dome structures that will become cultural and scientific centres, residential waterfront homes for 5,000 people, and approximately 150 floating, highly energy-efficient eco-homes anchored in the water.

Blue Eden will be sited along an extensive area of land and water, to the south of the Prince of Wales Dock in the SA1 area of Swansea.

All the project’s buildings and facilities, including the eco-homes, will be situated alongside the lagoon and will utilise and enhance the existing land in the area.