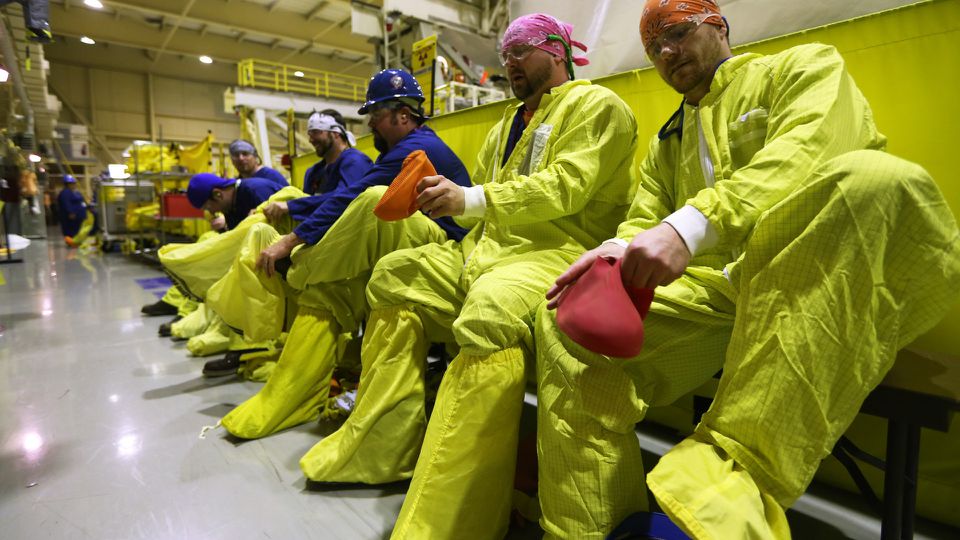 Exelon Corp., operator of the biggest U.S. nuclear fleet, says the move allows for "healthy workers to remain on site for more hours, reducing the need to bring in outside travelers and vendors."

Nuclear power plants can now implement longer shifts for workers and delay some inspections, raising concerns that as the coronavirus pandemic upends basic operations the industry may be bending the rules too far.

The Nuclear Regulatory Commission is already allowing six U.S. power plants to extend workers’ shifts, to as long as 12 hours a day for two weeks, and more may be coming. That’s up significantly from current standards that require people to get two-to-three days off a week when pulling shifts that long. Employees can also work as many as 86 hours in a week now, up from 72 hours.

To curb transmission of the virus, utilities also say they want to delay inspections that require people to work in close proximity. Environmental groups, though, warn the changes could have disastrous results, and worry they could lead to further deviations from safety rules.

“This is a step backward,” said Eric Epstein, chairman of Three Mile Island Alert, a Pennsylvania non-profit group. “It’s not a good idea to stretch workers and marginalize safety standards.”

The new rules come as at least 42 construction workers have tested positive for the coronavirus at a nuclear plant in Georgia where Southern Co. is building two new reactors. Last week, the utility and its partners announced they would reduce the 9,000-person workforce by 20 percent to slow the spread of the virus. The government considers nuclear power plants to be essential, and reactors will supply almost 21 percent of the country’s electricity this year.

Exelon Corp., operator of the biggest U.S. nuclear fleet, says it “can no longer meet the work-hour controls” at four of its reactors, including the Braidwood plant in Illinois. NextEra Energy Inc. said the same thing about its Seabrook power plant in New Hampshire. The companies say that the extended work hours won’t have an adverse impact on safety.

“The work-hour rule exemption is an important contingency that may be implemented to allow healthy workers to remain on site for more hours, reducing the need to bring in outside travelers and vendors,” Exelon spokeswoman Linsey Wisniewski said by email.

But watchdog groups are concerned that employees may be overworked, leading to fatigue and potentially errors. “You want an alert workforce,” said Paul Gunter, a director at Beyond Nuclear. “You don’t do this with bus drivers, but they’re saying it’s OK for nuclear power plant workers.”

The NRC is also granting utilities utilities permission to defer some inspections as dozens of reactors go through the annual spring refueling cycle. These projects can involve more than 1,000 people converging on a power plant for a month or more of maintenance and testing.

Pinnacle West Capital Corp. also has approval for longer hours and is postponing an inspection of components on the bottom of the reactor vessel at the 3.9-gigawatt Palo Verde nuclear plant in Arizona, the biggest U.S. nuclear plant. The company had initially planned to conduct the evaluation during its refueling outage this spring, but has now pushed that out until the next one, in late 2021. The utility owner determined that the task posed a potential risk of spreading the deadly virus, and could be safely delayed.

“Only work that is absolutely required for refueling the unit to safely and reliably operate for the next 18 months is being conducted,” Jill Hanks, a spokeswoman, said by email. The plant has not imposed longer shifts, but now has the option to quickly do so if necessary.

The NRC is on board with the new reality of operating nuclear plants during a global pandemic and is developing guidance for deferring maintenance work. “There are some ancillary activities during an outage that can be deferred,” said Scott Burnell, a spokesman for the agency.

Entergy Corp. is planning to defer some leak tests at pipes at its Grand Gulf reactor in Mississippi. The tests typically are due every 11 1/2 years, but will now be rescheduled for the next refueling outage in 18 months. Pushing that period out to 13 years won’t affect safety, the company said by email. And at the Indian Point facility north of New York City, Entergy is also seeking permission to postpone annual physical evaluations for firefighters.

Nuclear watchdogs are paying close attention to four sites that have requested permission to delay tests on steam generator piping, including Exelon’s Braidwood. The agency already approved NextEra’s request for its Turkey Point plant in Florida.

The pipes carry water at high pressure, allowing it to stay liquid even as temperatures reach 600 degrees Fahrenheit (316 degrees Celsius). They are supposed to be inspected every three years, with the job requiring people working in close proximity. Because of the virus, the operators are seeking to delay this until the next refueling cycle in 18 months.

These components have a fraught history. In 1999, Consolidated Edison Inc. sought a similar delay to inspect the generator piping at Indian Point, which it owned at the time. The company was granted a 12-month deferral, but eight months later one of them started to leak. While a small amount of radioactive gas escaped into the air, the incident was quickly contained and the NRC concluded it didn’t pose a threat to health.

A report by the NRC’s Office of the Inspector General later found that the agency’s original evaluation, approving the delay, was “not adequate.” The NRC’s Burnell said the agency has learned a lot about those systems in the past two decades and there’s little chance that kind of accident would be repeated now.

Requests for delays must be accompanied by significant documentation, and “the NRC will only consider deferring the required inspections if that information clearly shows it’s reasonable to expect continued safe operation of the steam generators until the next inspection,” Burnell said by email.

NextEra said “it would be speculative to compare conditions at Turkey Point to conditions at other nuclear plants,” spokeswoman Lindsay Robertson said by email.

Beyond Nuclear’s Gunter says the Indian Point leak may have been prevented if the inspection had taken place on schedule, and the incident points to the potential risks of extending maintenance reviews. As the coronavirus affects the entire global economy, he’s concerned that a wave of extension requests from utilities may lead to other incidents.

“It’s a gamble,” Gunter said. ”Our concern is that they’re creating the conditions for a perfect storm. There could be a catastrophic incident that results from postponing inspections combined with fatigue from people that are overworked.”