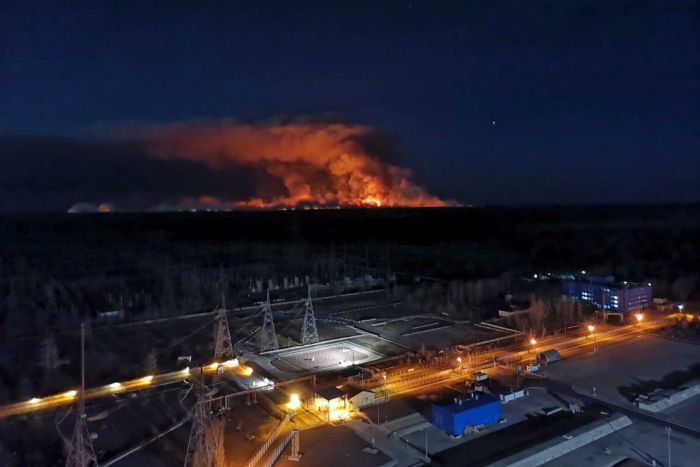 Radiation levels near the wildfires have risen, and the blazes have produced swirling smoke which is being blown towards neighbouring regions.

Winds had blown the smoke towards rural areas of Russia and nearby Belarus, but they shifted in the direction of Ukrainian capital Kiev over the weekend.

Authorities in Kiev, which has a population of about 3 million people, say radiation levels in the city remain normal.

Its citizens are already in lockdown due to the coronavirus pandemic.

The winds are more of a significant headache for the site of Chernobyl's closed nuclear power plant. Strong gusts could spread the fires towards what is left of the facility as well as the abandoned equipment used to clean up the disaster.

"At the moment we cannot say the fire is contained," acting head of the State Agency of Ukraine on Exclusion Zone Management Kateryna Pavlova said.

What stands in the fire's path?

Fires are common inside the "Zone of Alienation", a circle with a 30-kilometre radius that surrounds the old nuclear plant and is fenced in barbed wire.

But the current blazes are larger than normal and are stirring up radiation as they burn grass and forests.

Winds could spread fires to remnants of the nuclear plant and authorities are trying to protect the critical infrastructure in the exclusion zone.

This includes the plant itself (and its radiation-containing sarcophagus), as well as the so-called "graves" — parking lots of abandoned, contaminated trucks and vehicles left behind from the original disaster.

"We have been working all night, digging firebreaks around the plant to protect it from fire," Ms Pavlova said.

What happens when an irradiated tree burns down?

In the 34 years since the disaster, radiation has settled into the exclusion zone's soil and been absorbed by the roots of trees and vegetation.

While many plants in the immediate vicinity of the plant died when the nuclear reactor exploded, the plant life within the exclusion zone adapted over the decades to come.

However, the radioactive particles are brought back to the surface of the soil and released in smoke when the plants burn in fires.

The exclusion zone was established after the April 1986 disaster which saw a reactor explosion send a cloud of fallout over the European continent.

The Zone of Alienation is largely unpopulated, save for about 200 people who have remained in the area despite government orders to leave.

The Chernobyl Exclusion Zone was established after the April 1986 disaster at the plant sent a cloud of radioactive fallout over much of Europe.

People are not allowed to live within 30 kilometres of the old power station, where a giant protective dome was put over the fourth reactor in 2016.

The dome, called the New Safe Confinement, enclosed the temporary "sarcophagus" built around the reactor immediately after the disaster.

Chernobyl's three other nuclear reactors continued to generate electricity until the plant finally closed in 2000.