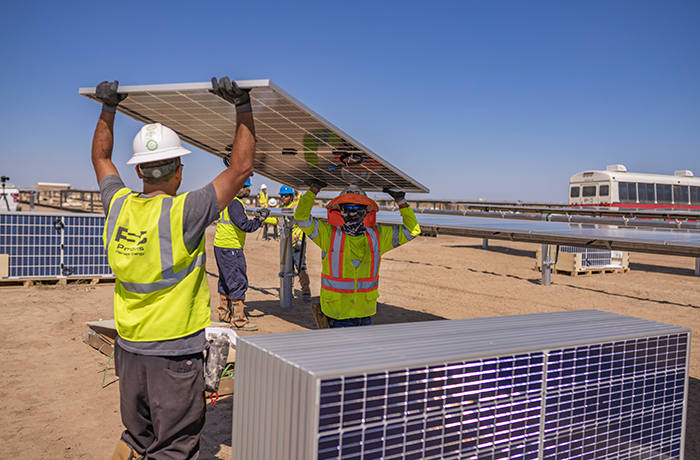 Texas: How the Home of US Oil and Gas Fell in Love with Solar Power

A solar farm the size of a small city will open in the Texas shale heartland this month, adding more competition to a US oil and gas industry that is already flat on its back.

The blue rows of panels at the Oberon photovoltaic project will generate 150 megawatts of power when they plug into the grid south of Notrees, an appropriately named town in the Permian Basin. Oberon’s developers want to eventually expand the project to 1,380MW — enough to serve 230,000 homes.

A boom in solar projects is under way across Texas, the US oil and gas capital. The state will build a quarter of the record new industrial-scale solar capacity being installed across the US this year, according to the Energy Information Administration, part of the department of energy.

Much of that solar investment is taking place in the Permian Basin, the centre of a US shale oil industry that is now reeling from the impact of the coronavirus crisis and the price war between Saudi Arabia and Russia.

The solar projects are a threat to fossil fuels. Renewables have helped to force the closures of coal-fired power plants. They are now challenging the primacy of natural gas in the US electricity generation mix as the price of solar equipment keeps on falling. The Republican legislature has declined to rein in rapid increases in wind and solar despite its historic friendliness to the oil and gas industry.

Chevron's Pasadena refinery in Texas. Houston municipal government now gets 92 per cent of its power from wind and solar energy
Yet clean energy has a more complicated relationship with fossil fuels in Texas, a state of 29m people proud of its independent streak. Shale oil fracking has been a big driver of electricity demand, helping to spur investment in renewables.

The relationship is visible among Oberon’s solar arrays. Cut out of the rows are empty dirt rectangles the size of parking lots. The developer, 174 Power Global — a division of South Korea’s Hanwha Group — left the spaces to enable oil drilling rigs to set up and bore wells underground, says Jason Garewal, head of business development.

“West Texas is oil and gas territory, it’s not solar territory today,” he says. “And so we were pretty proud of our ability to add to the energy mix without taking away any future oil and gas extraction.”

Solar’s gains could be hindered by the fall in oil prices as West Texas Intermediate crude trades below $30 a barrel — less than half its price in January. The damage from coronavirus could also hit electricity consumption, sideline construction workers or disrupt the flow of financing, clouding growth for solar generation.