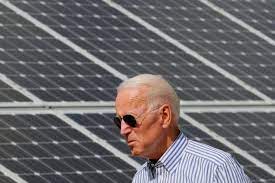 USA President, Joe Biden has issued a plan to increase the use of solar power in the country from 3% to over 40% in the next 30 years.

The Department of Energy published a blueprint on Wednesday on how to provide 45 per cent of US electricity from solar by 2050, which would involve ramping up production of solar panels and modernising energy infrastructure across the country.

Biden has announced renewable energy is the way forward for America, being the worlds second largest polluter. His plan will help tackle climate change, reduce emmisions all while providing thousands of jobs.

The Solar Futures study found that to achieve 40 per cent solar in the next 15 years, the US must double capacity per year between now and 2025, and then double it again from 2025 to 2030.

Secretary of Energy Jennifer Granholm noted that solar is the country’s “cheapest and fastest-growing source of clean energy”, producing enough power to run all American homes by 2035 while employing 1.5 million people.

In 2020, the US installed a record amount of solar — 15 gigawatts — to total 76 GW, the government report stated, making up 3 per cent of the current electricity supply.

As he toured neighbourhoods in New York and New Jersey ravaged by Storm Ida on Tuesday, President Biden underlined the role that the climate crisis played in the disaster.

“We’re all in this,” Mr Biden noted while on a walkabout in Queens with New York Governor Kathy Hochul, Mayor Bill de Blasio and Congresswoman Alexandria Ocasio-Cortez.